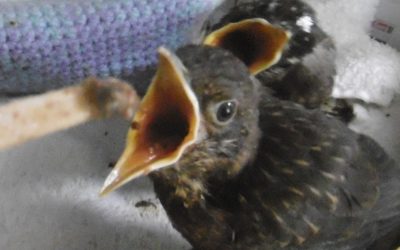 This spring, I’ve been getting closer to birds than I ever dreamt of by volunteering at the wildlife rescue centre Secret World.

At this time of year, the centre is full of young birds who need help from humans to make it to adulthood. Generally orphaned and sometimes injured, they will be cared for until, having spent the latter stages of their stay with minimal human contact, they are released back into the wild. Depending on the day, the hospital section where I’ve been working might house groups of blackbirds, pairs of robins and dunnocks, pigeons, a magpie, a couple of crows and a nestful of tits – the range of birds typically found in British gardens.

This kind of beyond-the-call care of wildlife – a step on from the love of nature that prompts over half the adults in the UK to feed the birds in their garden
– is biophilia-in-action.

The love is in the detail. The birds have to be fed at regular intervals – between one and four hours, depending on age – and the details of what they consume recorded in their patient notes. Each is weighed daily, so that weight loss or a failure to gain can alert staff to an underlying medical condition. Birds who share cages are distinguished by Tippex marks on their heads and dubbed ‘White Mark’, ‘Two Spots’ or ‘No Mark’.

Blackbirds are given a mix of tinned cat food, mealworms and bogena – a dry mix of crushed insects – on a paintbrush or a wooden coffee stirrer. Most other species are fed live mealworms or waxworms on tweezers, chopped into beak-sized pieces.

On my first day, my fellow-volunteer teaches me the technique of holding the stick almost vertically above the bird’s head and, when its beak gapes, popping the food in. (Think the ‘and here’s an aeroplane …’ trick when feeding a baby). You might persuade a reluctant bird to gape, she adds, by tickling the sides of its beak with the stick.

Many of the birds are eager to feed, hopping around, literally gaping, and would willingly consume more than the maximum six helpings thought to be good for them at any one time. One group of blackbirds practically queues, those at the back waiting until the front one has had his fill. One of a trio of large, hungry birds seems to work out that his chances are better if he separates himself from the other two, hopping to a part of the cage where I can feed him without competition. As Secret World’s founder Pauline Kidner says: ‘wildlife knows when you’re trying to help it’. Then again, some birds seem not to, fluttering away from the stick in fear.

Feeding a sestet of long-tailed tits is a challenge: they huddle together in their woollen nest. They are truly tiny: their wingspan is half the length of my thumb, a delicate construction of little bones and feathers. I am supposed to chop their waxworms into thirds, but this is tricky as the caterpillars compress their fat bodies at the touch of the scissors, and the chopped segments join up with other bits. But I find that surprisingly large chunks of caterpillar disappear down into the tiny beaks; the nestlings will eat whole insects in nature, after all.

But a bird won’t feed if it’s cold. A newly-arrived blackbird with an injured wing needs warming up, and I’m asked to make a ‘hot glove’ – a glove filled with hot water which will act as a hot water bottle.

Then there are the ‘blobs’, as birds so recently hatched so as not to have grown any feathers. A robin, bald apart from a bit of fluff on his head, was brought in that morning after being attacked by a cat. The general view is that he’s unlikely to survive, but valiant attempts are made every half-hour to get him to take a creamy mix of neonate from a pipette.

Feeding a bird is a peculiarly absorbing activity, one that makes the world around you disappear: briefly, two entirely different species come together in a common project. But, working in the animal hospital, it also strikes me how soon the sense of wonder at being close to wildlife disappears behind the round of tasks involved in being a bird-nurse. The cages must be cleaned and disinfected daily; piles of towels are sent to the laundry, fresh greenery cut to ‘enrich’ the birds’ living quarters … and then it’s time to start feeding again. I imagine nurses faced with a ward full of humans feel similarly.

At the same time, I notice that almost everyone who comes into the hospital rooms talks to or about the birds in affectionate, humanising terms. It’s a sign that, despite the conservation orthodoxy that carers should remain aloof around animals destined for release, a relationship is in progress. Humans are vocal animals, and our biophilia needs expression.

One lunchtime, having moved to another section to work with mammals, I return to the hospital to visit the birds. I am taken by a trio of gold finches, identifiable by the distinctive colouring that is beginning to form out of the browny-grey mass of feathers. ‘So you miss the birds’ observes my former trainer, and invites me to feed them. Two of the finches are keen, but third third one gapes and then turns his head away every time the food comes close. Feeding becomes a two-woman job – my companion holds the reluctant feeder while I proffer the food. He keeps his beak firmly closed. ‘I think he’s blind,’ she says. ‘If he doesn’t eat, he won’t make it.’

At the end of the day I pop back to see how he’s doing, and find that he’s finally fed.