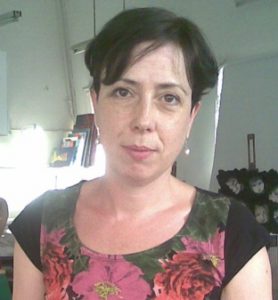 Sign up for updates on my Europe project and get exclusive material from The Three Cities:

Alex Klaushofer is an author and journalist who has written extensively on social and religious affairs and politics in Britain and Middle East, before realising that this really just boils down to writing about people and places.

Born in London but raised in Gloucestershire, she studied English at Oxford University in the 1980s. She then worked her way through a PhD in continental philosophy at Essex, teaching first in a secondary school and then in higher and further education.

But she soon felt the need to get out more. In 1998, an internship at the New Statesman and a summer teaching English in a Palestinian refugee camp set the course for a new career in journalism. Editorial jobs on public policy magazines followed, along with freelance contributions to publications such as the Guardian and the Telegraph. She returned periodically to the Palestinian Territories, first as a journalist and then as Middle East communications manager for Christian Aid.

After a while, post-war Lebanon started to look like an attractively quiet place for a book featuring the human stories of the Middle East. Paradise Divided explored the mix of social, political and religious forces that make up this complex country and led to appearances on BBC radio programmes such as From Our Own Correspondent and Excess Baggage.

Back home, she decided to explore a hidden side of her native land which had long intrigued her. Her second book, The Secret Life of God, is a kind of spiritual investigation into twenty-first century Britain which chronicles how, in an ostensibly secular age, people are finding new ways of believing and belonging.

Alex now considers herself to be a ‘hybrid author’ and is stimulated by the opportunities for new forms of writing opened up by the digital revolution. As a writer of the kind of narrative non-fiction that traditionally takes years to produce, she’s delighted at the birth of the midform, a publication shorter than a book but longer than an article and finds it ideally suited to pieces of reportage on particular themes. She is currently working on a third full-length book which explores Europe through the lens of three of its contrasting cities.

She has served on several committees of the National Union of Journalists and the management committee of the Society of Authors and is a  member of the Alliance of Independent Authors.