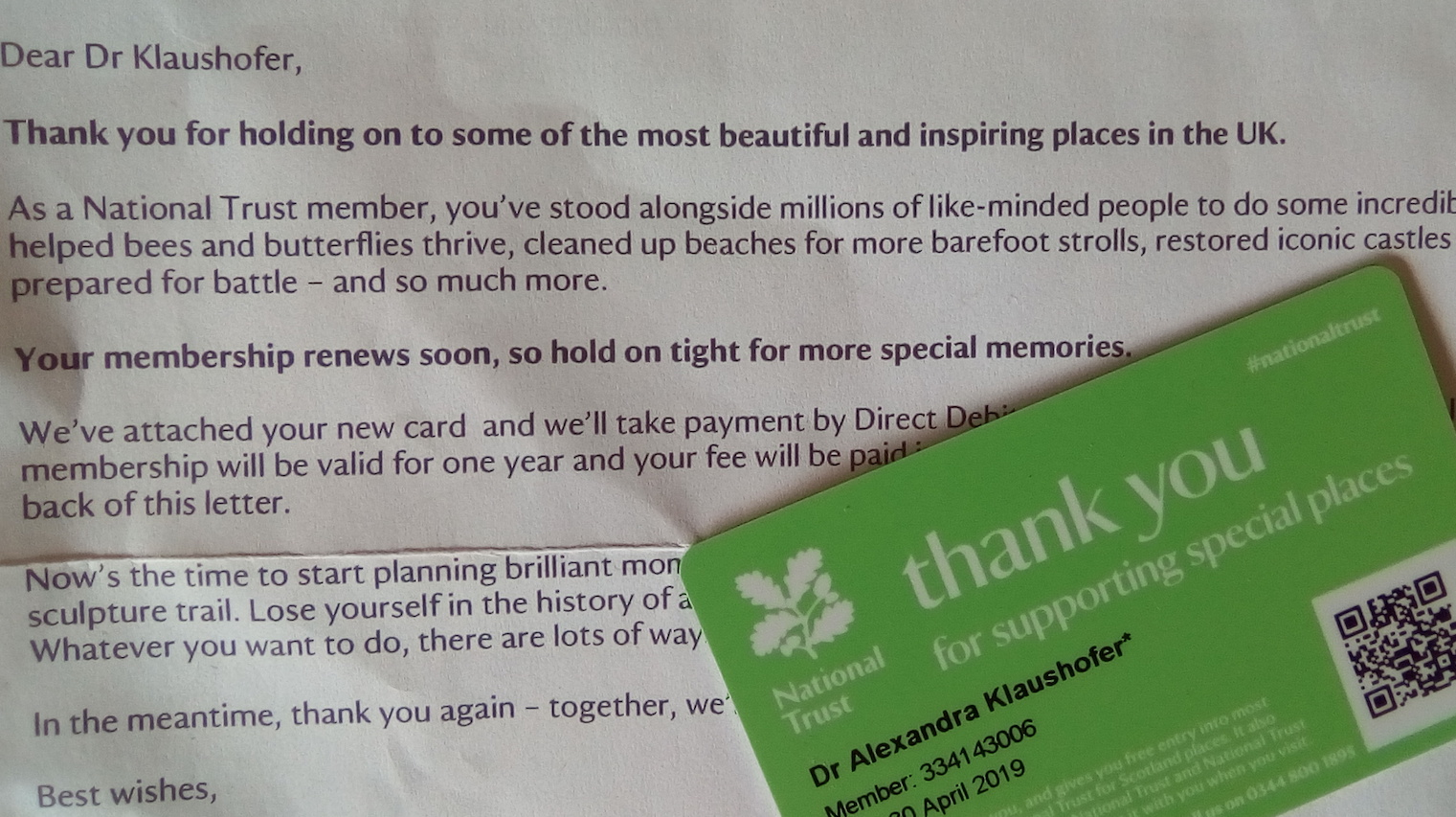 The letter from the National Trust bearing my card for another year of membership oozes emotive prose. The buzzwords promise experiences and memories I’ll want to treasure – ‘inspiring’, ‘special’, ‘brilliant’ – while the small print details the new subscription fees and my payment schedule.

But I won’t be continuing my membership of Europe’s largest conservation charity. It came about accidentally – the result of a hasty decision involving a goddaughter, high entrance fees and a very persuasive saleswoman – “are you under 25?” – which overrode my natural ambivalence about joining such a big, affluent organisation.

As Britain’s second-largest landowner, the National Trust is undoubtedly a force for good, using its wealth and reputation to protect buildings and spaces that would otherwise be gobbled up by developers. In return for their support, its five million members get access to beautiful places which, with guaranteed parking, toilets and cafe, make ideal days out for those with young children or the elderly. It’s almost like an arm of a very historically-minded state-cum-primary school.

But, like many big organisations with a strong sense of their identity and purpose, the National Trust’s decisions are also driven by a need to protect its corporate interests. And the one that has tipped my ambivalence into disaffection is its position on trail hunting.

Trail hunting is one of those odd British inventions. Devised in the wake of the Hunting Act of 2004, it’s an attempt to preserve traditional hunting without an actual animal, replicating the features of a hunt: packs of hounds pursuing an animal-based scent in areas known to contain foxes or other huntable mammals. You could say it’s a typically British fudge which expresses our national ambivalence about foxes, our most hated and best-loved wild mammal.

You could say that the National Trust’s position on trail hunting is also something of a fudge (not to be confused with the excellent substance available in its shops). Amid fears from animal rights campaigners that trail hunting is a cover for illegal hunting, the trust regularly gives local hunts permission to use its land, granting licenses to 79 hunts in 2016. But it does not invest any resources in ensuring that the complex rules governing trail hunting are enforced, only investigating when allegations of illegal activity are made. It looks, say critics, as if the trust may be turning a blind eye to illegal hunting in order to keep other landowners sweet.

Not surprisingly, given a membership that tends to love the creatures who live on the land as well as the land itself, many of its supporters want the trust to stop hosting hunting. At the organisation’s AGM last October, a vote to ban trail hunting was defeated by 299 votes. The board had advised members to vote against the ban and allocated the proxy votes of those not attending the AGM to the chair, prompting the thought among some members, including yours truly, that the vote was skewed.

So this month sees the end of my National Trust membership. The organisation’s auto-renew system deprives me of any active way of making a decision, and there’s no number to ring on their website. All I can do is cancel my direct debit and ignore the demands for payment that they promise to send. Perhaps, in a gesture symbolic of my inalienable agency, I’ll cut up my card, thinking of foxes as I do so. Orphaned Foxes, a short book chronicling my experiences of helping to raise abandoned fox cubs, comes out next month.

The ebook is available for pre-order here. The print edition will be available from 27th April.