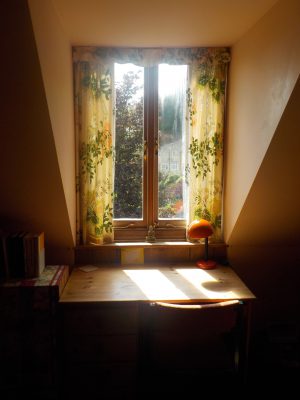 You’d never know. An unobtrusive Georgian townhouse on one of Bradford on Avon’s busiest roads, where the cars back up to squeeze through the town’s narrow streets, is home to a Buddhist monastery.

Founded in 1986 as part of a monastic order called the Aukana Trust, the monastery is only open to the public for an afternoon every other year. The house on Mason’s Lane, now called the Monastery of Absolute Harmony, is currently home to three monastics, with their spiritual director Paul Harris living next door. Having visited many Christian monasteries in Lebanon and Britain, I was curious to see what their Buddhist counterpart would be like.

So, on a sunny afternoon in June, a friend and I make our way down Mason’s Lane. The double doors that must originally have made way for a carriage have been thrown open, and the place is full of people. The first surprise is the extent of the sloping gardens that fall away from the house, divided by hedges to form ‘rooms’ for various purposes from meditation to vegetable-growing. There are clear views over Bradford’s distinctive townscape, and the onion-shaped dome of the Catholic Church seems only a stone’s throw away.

The other surprise is that among the many, largely female, helpers and greeters, my companion and I have quite a few acquaintance. They’re part of the monastery’s wider community who come to weekly meditations and on retreat; some have been doing so for decades.

Our shoes are collected through window as we go into the house, which is fully carpeted in a series of soft, warm colours – soft gold, muted pink and deep blue – to minimise noise. We are greeted at the top of the stairs by Sister Sarah, a smiley woman of perhaps fifty, with close-cropped hair, dressed in a navy karate-style trouser suit. I ask her about the monastic day.

‘Mornings are quiet, starting with a group meditation – one person takes it in turns to get the breakfast,’ she smiles. In the afternoons, the work of the house and garden is done, still in silence – a kind of ‘working meditation’. The evening meal is the talking time of the day. ‘Structure is essential,’ she adds. ‘It’s difficult to meditate on your own. There’s a part of us which is lazy and will always find something else to do’.

So far, so like the division of the day into work and prayer followed by the order of Benedictine nuns that I stayed with when researching Christian monasticism.

As we move through the retreat wing, we are impressed by the rooms offered to retreatants: generous-sized and simply but comfortably furnished. Each has a single colour theme: apricot-gold, pale green, powder blue, and can’t resist choosing our favourite room. Mine is the Crane Room, a large room decorated in shades of gold and with a triptych of windows overlooking the town. It reminds me of my own home but without the (psychic) noise created by my busy mind.

The attic rooms where the three resident monastics live are smaller but furnished along similar lines. There is no sign of personal possessions, apart from a few carefully-chosen Buddhist images and statues.

The interior of the monastery, we learn, is maintained according to the Buddhist principle of impeccability, which rules that everything must be kept simple and clean.

Barbara, a mutual acquaintance, a long-standing friend and beneficiary of the monastery tells us about the week-long retreats she does: there’s silence all day, including at meal times (retreatants are given a tray to take to their rooms). But there are three, pre-arranged sessions of twenty minutes with Paul during the week to discuss any concerns that come up through meditation. Like children, we ask her which room she likes best. The blue one, she replies immediately. But, she adds, to avoid creating an ‘attachment’, retreatants are not allowed to stay in the same room twice. Emanating pride, she shows us the shrine which, she says, is ‘the centre of the monastery’. It’s a large room, almost a small hall, carpeted in rich blue, with rows of chairs facing the golden shrine.

Personally, I prefer my shrine carpeted with grass and with hedges for walls. We sit in several of the monastery’s garden rooms, ending up in the shade of some trees by a large leylandi hedge. On the other side is Mason’s Lane, with its never-ceasing traffic. An emergency vehicle screams past and makes the point about two worlds co-existing side-by-side. When I’m next in that traffic I won’t see this road in the same way again.